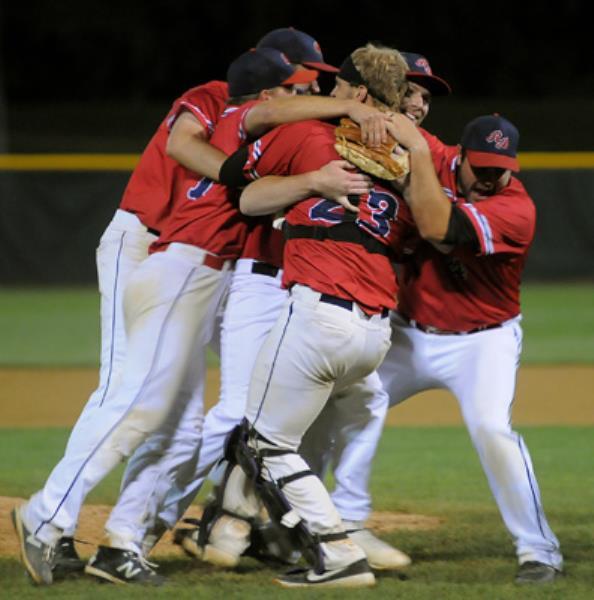 Steady pitching and Zach Hoffmann's three-run home run in the fifth inning propelled the Chanhassen Red Birds to their fourth consecutive Class B championship with a 9-2 win over Miesville on Sunday night at Chaska Athletic Park.

Hoffmann and Chanhassen manager/shortstop Brandon Arnold called pitching the key to winning the tournament over the years.

Winning four in a row is "a cool feat and something we can be proud of," Hoffmann said. "It's tough to do four times I don't care who you have on your team. Everyone's gunning for you."

"I don't care what level of baseball you're playing at, when you can do it four in a row and people are coming for you, it's pretty special," he said. "It felt even better this year just because there were people who picked against us not thinking that we could do it four in a row. That gave us some extra motivation.

"I'm proud of our guys for competing. We had some guys missing this year. We all year stepped up and had a great team."

Hoffmann gave most of the credit to the pitching.

"Our pitchers threw well all the tournament," Hoffmann said. "They're the reason we won. When pitchers keep it close, it's easy and fun to play. That's why we've won it the last couple of years."

Three-time tournament MVP John Straka is the ace of the pitching staff. He had a 3-0 record in the tournament.

But a bunch of other pitchers stepped up for the Red Birds.

Reliever Logan Spitzack pitched the next 3 1/3 innings without allowing a run on two hits, no walks and five strikeouts.

Miles Nablo pitched the ninth for Chanhassen, getting three up and three down.

Arnold agreed that the Red Birds' pitching has been unbelievable.

"That's been our tradition all four years," he said. "We've got guys like Miles Nablo who threw two innings this tournament. And we had guys that didn't throw at all, and they're absolute gamers on the mound. So our pitchers stepped up again and carried us. We had some timely hitting, but when we needed it, they were the guys that we relied on."

The game was a showdown of the last five Class B champions. Miesville won state titles in 2016 and 2017. The Red Birds had to beat Miesville twice to win the tourney in 2018 and Dundas twice in 2019.

Lefthander Thomas Shogren pitched the next 2 1/3 innings, allowing one run on two hits, three walks with one strikeout.

Thomas Bruchu pitched the eighth inning, allowing one run on no hits and one strikeout.

Chanhassen took a 1-0 lead in the third inning. Aaron Pfaff stretched a single to right center into a double and scored on a single to center by Brandon Arnold.

Miesville took a 2-1 lead with two runs in the fifth. Max Moris singled and then consecutive walks to Ben Vujovich and Max Gamm loaded the bases. Joey Werner drove in Moris on a force out at second. Matt Van Der Bosch drove in Vujovich with a single.

Chanhassen took a 5-2 lead in the fifth with four runs. Hoffmann hit his three-run homer over the 355-foot sign in left center to give Chanhassen back the lead. Riley Johnson reached on an error and scored on a single by Ben Livorsi to make it 5-2 Chanhassen in the fifth.

"I had to do something after those first two at bats, so I just tried to keep it simple," Hoffann said. "I timed a fastball finally and put it in some yard."

The Redbirds scored a run in the seventh to up their lead to 6-2. Hoffmann walked, Johnson grounded into a force out at second, Ben Livorsi walked, Justin Anderson drove in Johnson with a single.

Chanhassen finished off the scoring with three runs in the bottom of the eighth to win 9-2. Andrew Mahlke led off with a walk. Pfaff singled. The runners moved up to second and third on a wild pitch. Michael Jurgella was intentionally walked to load the bases. Johnson reached on a error to score pinch runner Justin Arnold. Johnson was hit by a pitch to drive in Pfaff. Ben Livorsi hit a sacrifice fly to drive in Jurgella.

Pfaff led the Red Bird's 10-hit attack, going 3-for-5 with two runs scored. Brandon Arnold also had multiple hits, going 2-for-4 with one run and one RBI.

Joey Werner was the lone Mudhen with multiple hits. He went 2-for-4 with an RBI.