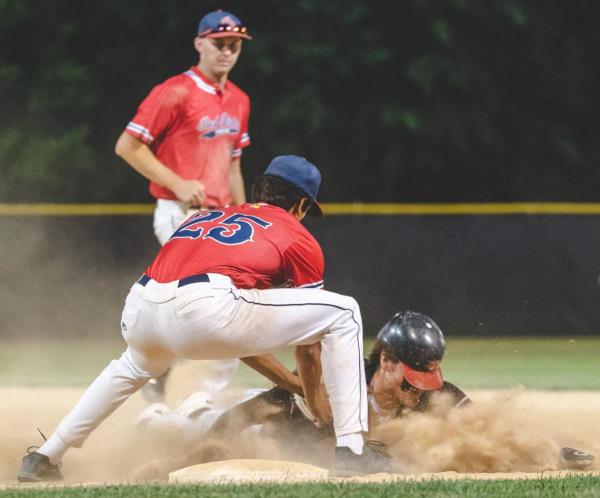 The question into the 2020 Class B State Amateur Baseball Tournament was could anyone dethrone the Chanhassen Red Birds?

The answer was no; Chanhassen running the table, finishing with a single non-conference loss early in the season, claiming a third consecutive state championship.

The Red Birds have been the class of Class B ball over the last three years, winning 89 games to 14 losses. Chanhassen has won 34 of the last 35 River Valley League games and is off to a 13-1 start in 2021.

Chanhassen’s roster is fairly intact from a year ago, but there have been increased roles for some of the younger players including Jack Nemetz and Nathan Rosenberg at the catcher position. The 2020 starter, Ben Livorsi, is playing in the Northwoods League in Kokomo, Indiana.

Justin Arnold, the younger brother of Brandon, and their cousin, Noah Drusch, a state champion at Farmington High School last month, have also been regular starters in the outfield and at second base. Outfielder Joe Jersak, designated hitter Andrew Mahlke and Class of 2021 Chanhassen High School seniors Mitch Cummins and Jared Cook have also been in the line-up at times.

While Chanhassen’s offense is averaging 9 1/2 runs per game, their pitching and defense continue to be their trademark. John Straka, Tommy Thompson, Miles Nablo, Logan Spitzack, and Chris Choles have been mainstays in the rotation and bullpen throughout the back-to-back-to-back state championship runs.

Kody Dalen, Zach Hartford and Brandt Thompson are young guys that are also getting looks out of the bullpen for the Red Birds.

Chanhassen continues to lead the River Valley League, posting a 7-0 record in the month of June versus the likes of Prior Lake, Burnsville, Eagan, Excelsior, and Shakopee.

Brandon Arnold and Jurgella homered, Hoffmann tripled, as the first four hitters in the Red Bird line-up (Anderson was batting clean-up) totaled eight runs batted in versus Prior Lake in a 12-4 win on June 30.

Straka, the MVP of the 2019 and 2020 state tournaments, fanned 11 batters over six innings in a 5-3 win over Burnsville June 28. Justin Arnold tripled, while Pfaff and Hoffmann doubled as the Red Birds held off a late rally with a Nablo save.

Choles threw six shutout innings with six strikeouts in a 10-0 win over Coon Rapids. Chanhassen had five doubles as a team with Anderson going 3-for-5 with two extra-base hits and three RBIs.

A four-run sixth inning broke open a one-run game in a 5-1 decision over Forest Lake for Chanhassen. Hoffmann was 3-for-3 with a double and RBI, while Anderson added a run-scoring pinch-hit single. Spitzack struck out five batters, allowing three hits over six innings.

Brandon Arnold’s two-run single scored Jacob Mrosko and Drusch as a part of a four-run eighth inning as Chanhassen defeated Eagan 10-6 on June 22. Nemetz added a two-RBI single to extend the advantage to four runs.

The lone loss came in a Sunday May game, a 7-3 loss to Tri-City Sharks, in which five Red Bird errors led to six unearned runs, including four in the ninth inning.